THE SAMPLE PAGES or DRAWING WHEN THE STAKES ARE HIGH

I just had the comicbook-thrill of my life.
C.B. Cebulski, the head talent scout of Marvel, liked my work on FHL enough to ask me to send him sample pages using Marvel heroes.
To that end, he sent me four sample marvel scripts to see how I'd handle them.
Once I received his email, I just couldn't sit still. I felt equal parts fear and excitement -  like a teenage boy on the verge of telling his crush that he liked her.
The four scenes were challenging to say the least. The samples came from X-force, two different Daredevil comicbooks and a Secret Avengers script.
The X-force script had a bunch of a characters that I was unfamiliar with, the Secret Avengers was difficult to understand which left me with the two Daredevil scripts.
The first one was Daredevil versus Captain America and the the second, Daredevil versus the Spot at a wedding.
I decided on the wedding scene just to give myself an easier time. It may sound like a copout but my nerves were already on high-alert and I needed to find a way to "level the playing the field," as it were.
The first page was the most daunting but once I got over that hump, things ran a little more smoothly. It took about three drafts - yes, I know, it's such a simple page but when you're drawing with such high-stakes, believe me, it's intimidating.
Then I just kind of hammered out the rest. I sent them as quickly as I could because, even though C.B. didn't give me a deadline, I didn't want to take longer than a week to get back to him. The paranoid part of me imagined a secret deadline.
And now it's done. It was thrilling and incredible to be so close to your childhood dream. Even if I don't get a gig at Marvel, which is most likely the case given the level of talent out there in the world all clamoring to enter Marvel, this week drawing Daredevil was truly amazing.
Now back to FHL Book II - which is now a week behind. 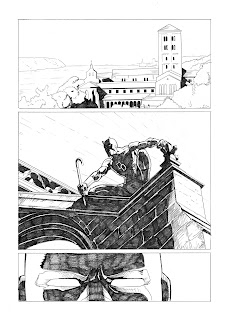 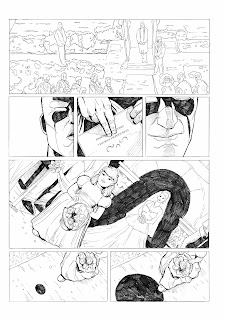 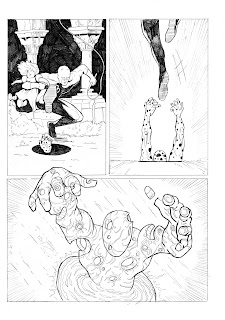 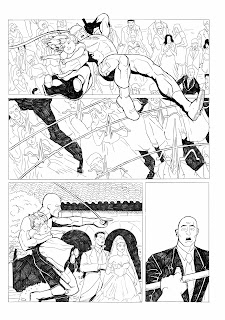